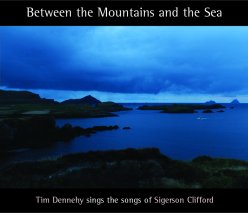 Between the Mountains and the Sea
Sceilig Records SRCD 003

As long as songs are sung Sigerson Clifford's, "Boys of Barr na Sráide", will elevate small-town life and the friendships of youth. Now, 90 years after his birth, fellow Cahersiveen man Tim Dennehy and accompanist Garry O'Briain breathe a new musical life into a dozen of his poems. This album is a beautiful tribute to Sigerson himself and with the help of Tony O'Shea's photographs takes us on a magical journey through the unique Iveragh Peninsula that lies between the mountains and the sea.

Having been born and raised in South Kerry, 'The Boys of Barr na Sráide', was our anthem at any gathering. Its author, Sigerson Clifford, was, to me at least, a mysterious figure of whom I knew very little.
My first teaching post was at the Oblate Father's National School in Inchicore in 1973 and there I encountered Sigerson's friend Tim Dwane an intelligent, gentle soul who met the author on a regular basis and who taught me much about the writer and the man. Then I discovered, 'The Ballad of the Tinker's Daughter', in a sixth class English reader and, having put a melody to it, I had great pleasure in singing it for the first time at the Góilín Singers Club in Dublin. It was also broadcast by Harry Bradshaw on the radio programme, 'The Long Note', and Sigerson wrote of his delight on hearing it.
Since then his presence has gently shadowed my live performances and my recorded output- each album has featured at least one Sigerson song. 'Between the Mountains and the Sea', has been an ongoing project for about twenty years and has brought me into contact with his family, friends and his many admirers.
Shortly after Sigerson's death the Ballinskelligs author Tim O'Shea wrote: "For Eddie Clifford there was another special world about which he would be forever singing- a place of bird song and yellow furze and quiet water at the silent mill; a world populated with characters quaint and droll who told set yarns in finely honed style. Steinbeck's Monterey was no more colourfully peopled. It was a private world that hinged on the Rocky Road, the Fair Field, the Old Road and Barr na Sráide but it would be presumptuous to plot its limits. It is enough to say that no one could have been more in thrall to happy memories of his native place than Eddie Clifford".
I hope that this place of sweet bird song and yellow furze will live and breathe through this album. I offer it now as a gift of thanks to the poet himself in the hope that it may be a small inspiration to those who might wish to recite his poems and sing his songs. And let us leave the final words to Sigerson himself - words written as a foreword to Dan O'Neill's 'Cahersiveen Memories': "In every corner of the earth there are Cahersiveen men keeping the flag flying. May this little book find its way into their hands so that in the world beyond Canburren Bog they'll not forget the Old Town under Beenatee Mountain and the beautiful people who were in it long ago".